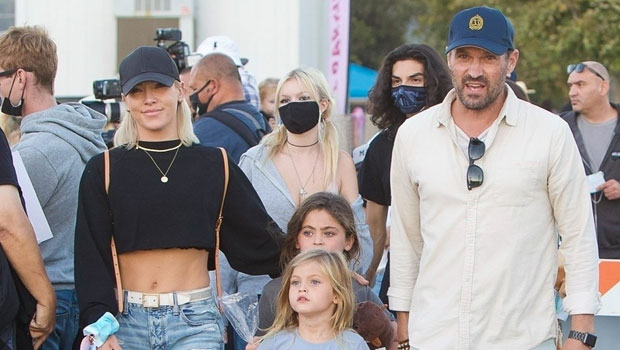 
Brian Austin Green and Sharna Burgess had fun at the Malibu Chili Cook Off with his three sons as they all kept each other close and enjoyed tasty treats.

Brian Austin Green, 48, and Sharna Burgess, 36, once again proved their relationship is going well when they showed up to the Malibu Chili Cook Off in Malibu, CA on Sept. 3. The lovebirds brought along the actor’s three kids, Noah, 8, Bodhi, 7, and Journey, 5, who he shares with ex Megan Fox, 35, for the fun and they were photographed while staying close and sampling some of the event’s tasty food. At one point, the Australian ballroom dancer even put her hand around one of Brian’s sons, showing off their growing bond.

Brian wore an off-white button-down shirt, light blue pants, multi-colored sneakers for the outing while Sharna wore a long-sleeved black crop top, ripped jeans, and black and neon green sneakers. They both topped their looks off with baseball caps, including a navy blue one for him and a black one for her. The kids wore casual outfits that included T-shirts, shorts, and pants.

The small group looked as comfortable as could be as they flashed smiles while walking outside and being surrounded by other cook off attendees, which included other celebs like Robin Thicke, Simon Cowell, David Arquette and Nicollette Sheridan. The boys were also holding bags of gold fish before leaving the event.

This isn’t the first time we’ve seen Brian and Sharna on an outing with his kids. A source previously told us that the blonde beauty met the boys as far back as March, shortly after they first started dating. “Sharna has met Brian‘s kids,” the source went on. “They’re official and she’s spending a lot of time at his place in Malibu. They’ve been dating [for] a few months and things are definitely getting serious between them,” the source EXCLUSIVELY told us at the time.

In May, Brian also shared a pic of Sharna posing and cuddling the boys while having fun in a pool. “Pool days,” he wrote with a smiley face and red heart in the caption.