Can the Future of Food Be Sustainable in a Rapidly Growing World? Cargill’s CEO Says They’re Investing in It 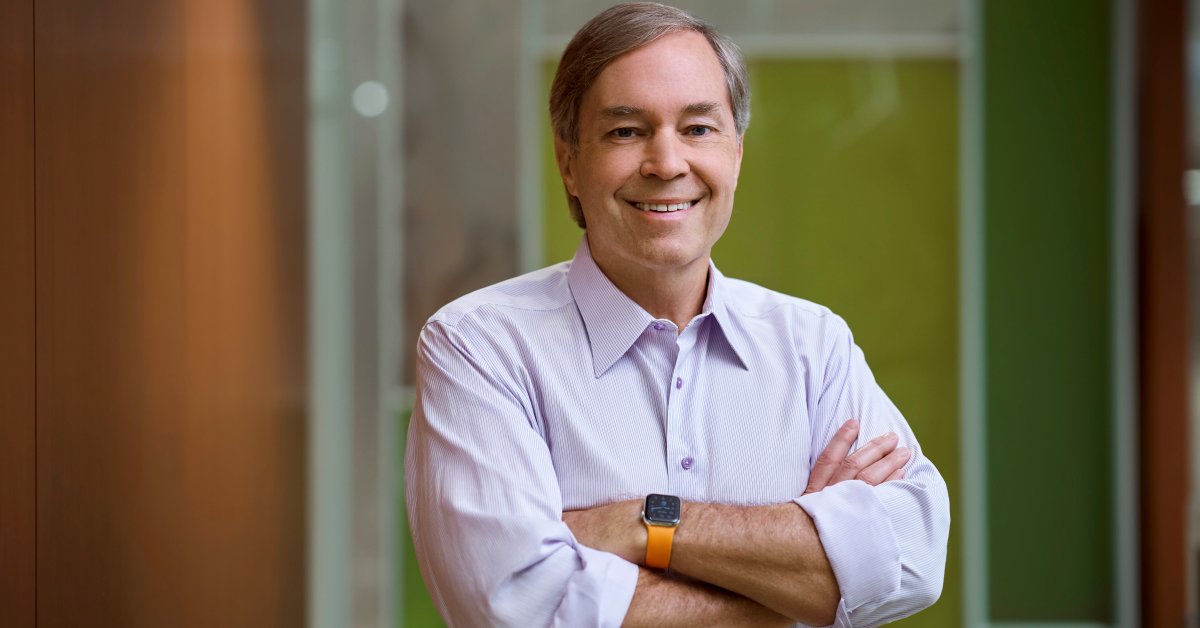 (To receive weekly emails of conversations with the world’s top CEOs and business decisionmakers, click here.)

The scale and reach of Cargill, the nation’s largest private company, is staggering.

The Minnesota-based company, which operates in 70 countries and has 155,00 employees, is involved in a range of businesses across the food chain, from selling feed to farmers, to commodities and meat processing. Cargill had revenues of $134.4 billion in its most recent fiscal year, which is equal to about .06 percent of the nation’s GDP. On Aug. 9, Cargill entered the U.S. poultry market by joining Continental Grain in acquiring Sanderson Farms for $4.3 billion, one of the largest deals in Cargill’s 156-year history.

As a leader in global agriculture, Cargill is taking steps to make its supply chain more sustainable and equitable, and has embarked on splashy ventures to reduce its carbon footprint. It has teamed up with a company started by a British sailing champ to develop enormous wing sails, nearly 15 stories high, to mount on the deck of cargo ships. (Cargill’s Geneva-based ocean transportation unit operates a fleet of more than 600 ships.) The new wind propulsion technology, which is aiming to launch next year, could reduce CO2 emissions by as much as 30% on the ships that deploy it, according to Cargill.

It has also teamed up with a U.K. startup to distribute a mask-like device for cows that captures methane produced when the bovine belches, converting it into less-damaging CO2. Cargill, which is a huge producer of a wide range of animal feeds, is also working on new feed formulations that would produce less gas in cows.

Big food companies are increasingly focused on how to satisfy the world’s growing demand for protein. Cargill CEO David MacLennan cites a statistic that global protein demand will increase by about 70% by 2050, as the world population approaches 9 billion people. In anticipation of that need, Cargill is investing in the development of cell and plant-based protein. For instance, it supplies faux meat maker Beyond Meat with the pea protein used to make its products. It is also investing heavily in the complex and controversial field of aquaculture, providing fish meal to the growing number of fish farms around the world.

MacLennan recently joined TIME for a video conversation on the challenges of a tight labor market, whether Cargill will ever go public and the future of food.

(This interview has been condensed and edited for clarity.)

Cargill touches so many aspects of the supply chain-where are you experiencing shortages or inflation?

Like many companies, we’re seeing some labor shortages, particularly in North America, in our animal protein supply chain. We do have a lot of touch points in the supply chains: we start with the farmer where the food is produced, and [we have] trucks, rail, barges, ocean transportation to get it to where it’s consumed or further processed. But by and large, things are working, other than the exception of tight labor supply in North American protein.

Is that the meatpacking plants specifically?

Yes. North American proteins are still pretty labor intensive businesses. One [meatpacking] plant might have 2,000 employees over three shifts. So the labor shortage is going to be more noticeable and more pronounced. It is constraining production, not significantly, but it means that you have to run the plant a little slower, not at full capacity.

These are some of the toughest jobs in the nation. What is your view on why there are labor shortages?

I think it’s a combination of things. Number one is people are choosing not to return to those jobs. They are tough jobs and people have more choices today with a tight labor supply and a lot of different industries looking for labor. Number two is that immigration constraints have put a crimp on access to labor. Immigrant labor was what powers plants and kept the food supply chain up and running. I think you’ve got an impact from the government aid that has come through COVID relief. Like many industries, people have been given support from government programs, so I think it’s a combination of those factors that have led to tightness in the labor supply.

In your view is the labor shortage transitory or lasting?

That’s the great question of today, isn’t it? I think it’s permanent. People have a different way of thinking about their work. I just read an article about virtually zero population growth in the U.S. These are things that have been predicted for a long time, with the shrinking labor force of the baby boomers and smaller generations of millennials and Zs. I think it’s a permanent shift.

And are you losing valued veteran colleagues who are saying ‘I’ve had a good run and now I’m going to go off and grow organic blueberries?’

Yes, we have. Certainly there are people that have said, “You know I had a good run, and I had a good career, and having a year of different working structure has given me a different perspective.” We are seeing that now.

Where are you seeing inflation?

I go back to wage inflation in our plants. Is wage inflation permanent in our [meatpacking] plants? I don’t know because you’ve always got automation and technology, which is modernizing these plants. And so that may offset inflationary price pressures.

Commodity prices are high. They’re much higher than they were a year ago. We’ve had strong demand from China for both corn and soybeans, so stocks have become very tight. Ag prices have gone up, but that has yet to roll through to the grocery stores.

Cargill has been criticized for its timetable on deforestation in regards to soy in Brazil. You’re eliminating deforestation from your soy supply chain by 2030. Why not faster?

I think it’s wanting to make commitments that we feel we could deliver upon. The supply chains in Brazil, and all throughout the world for commodities are very, very complicated. We have thousands of farmers in Brazil that depend on us for buying their products, and they have not committed illegal deforestation. We did declare a moratorium on purchasing from illegally cleared forest lands in the Amazon. We are not and will not source from farmers who clear land in protected areas.

We do not tolerate child labor in our supply chains. We have achieved 100% traceability of our cocoa supply chain in Ghana. In Ghana and Cote d’Ivoire, we are engaged with 7,500 farmers who are members of co-ops, and we have surveys that ask them the location of where they’re growing their cocoa, and how many children do they have on their farm and what are the ages of their children.

Then we use artificial intelligence to run data systems to use predictive analytics to say where, in these thousands of hectares of land where cocoa has been grown in those two countries, where the likelihood of child labor abuse and sustainable practice abuse is the highest. And we will not tolerate it. We will not purchase from any farm or source of any farm that has child labor abuses.

Let’s switch to ocean-going freight, where you operate a huge fleet. When you talk to CEOs this summer, there’s a lot of concern about delays in shipping.

You still have slowdowns in supply chains, which include ocean transportation due to COVID and some countries, either because of labor shortages or restrictions on vessels coming and going and that creates pinch points in the supply chain. You also got the reemergence of international trade. The Chinese have been actively restocking and purchasing agricultural products which take up ocean freight capacity. Therefore you have to wait longer to get your freight. It’s supply and demand, driven a lot by demand for ocean freight, but also slowdowns in certain areas of the world due to COVID protocols.

How will the food industry address the world’s growing demand for protein, particularly with concerns about greenhouse gases linked to beef production?

It means we’ve got to develop alternative sources of protein. We are in plant protein, for example, pea protein. We were one of the first to the the market with a plant-based protein patty. We are also investors in companies that are producing cellular-based protein. Cell-based and plant-based protein is something that is very exciting and we’re putting a lot of time and capital behind.

And then you’ve got protein coming from fermentation. So we are changing our portfolio to create alternatives and create choices for consumers for food that they see as being better for them, that is produced in more sustainable ways, that is the complement to traditional animal protein. But emerging economies still want to consume protein in its purest form, which is animal protein. That business isn’t going away.

There was a Forbes report a few years ago that there were multiple billionaires from the Cargill family. Are you feeling pressure to go public? Do you want to take this opportunity to announce plans to go public today?

Not today, tomorrow, or anytime soon. The family owners love being private.

What is the best way to feed the world’s growing population?

Make sure that you can travel across borders. Don’t erect trade barriers. Don’t use food as a weapon. Practice comparative advantage. Use your natural resources of your region, grow what is best suited for the soil, the climate, the access to water.

For example, the American Midwest is ideally suited for dairy. The dairy industry is less suited for California, with the strains on the water supply… That means politics has to be supportive of trade. One of the best ways to make sure that the 9 billion people in the world have access to food is to ensure that it can get from where it’s best produced to where it is most needed.

The Leadership Brief. Conversations with the most influential leaders in business and tech.

For your security, we’ve sent a confirmation email to the address you entered. Click the link to confirm your subscription and begin receiving our newsletters. If you don’t get the confirmation within 10 minutes, please check your spam folder.