Centre is running the longest ever exercise of distributing free food grains to people during this pandemic time: Secretary, Department of Food & Public Distribution

Centre is running the longest ever exercise of distributing free food grains to people during this pandemic time: Secretary, Department of Food & Public Distribution


278.25 LMT foodgrains allocated for Pradhan Mantri Garib Kalyan Yojana 3 & 4 for the benefit of most vulnerable

1.5 Crore monthly portability transactions are being recorded under ONORC:Shri Pandey

Centre will very soon finalise, a modal guideline based on suggestions received from States/UTs, for preparing list of common factors for inclusion or exclusion in Ration Card for beneficiaries: Shri Pandey

While addressing the media, Shri Pandey said that the Centre is running the longest ever exercise of distributing free food grains to people during this pandemic time. He said that heights have been scaled this year in procurement of foodgrains. On this occasion, a presentation was shared with media by CMD, FCI about the status of wheat and rice procurement during current marketing season. 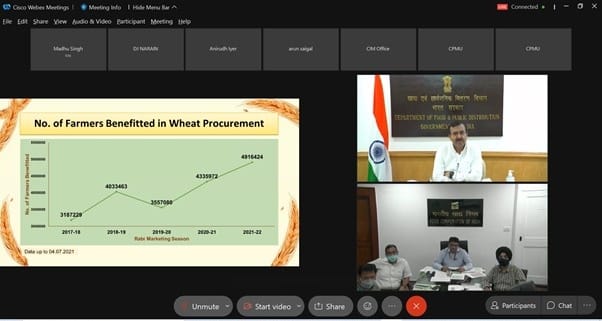 During the presentation Secretary, Shri Pandey informed that a record wheat procurement of 433.24 LMT was undertaken in RMS 2021-22, surpassing previous best of 389.93 LMT (RMS 20-21). He informed that the States of Punjab, Uttar Pradesh, Rajasthan, Uttarakhand, Gujarat, Himachal Pradesh and J&K recorded their best ever wheat procurement figure. He said that this year record 49.16 Lakh farmers have been benefitted so far, against 43.35 Lakh farmers last year.  He further added that the One Nation, One MSP, One DBT scheme have been implemented across the country and an all-time high amount of Rs 84,369.19 crore transferred directly into farmer’s account across India.

Secretary also briefed media about the implementation and progress of the PMGKAY 3-4 and ONORC Scheme. He informed that under PMGKAY 3 and 4 additional & free-of-cost foodgrains are being provided to around all 80 Crore National Food Security Act (NFSA) beneficiaries @5 Kg per person per month from May 2021 to November 2021.

He said to mitigate food security hardships of the poor & needy due to unprecedented economic disruptions caused by the pandemic, total 79.39 LMT (41.85 LMT Rice and 37.54 LMT Wheat) for May and June 2021 have been provided to beneficiaries under PMGKAY-3 and for phase-4 of PMGKAY,  total 198.78 LMT (107.58 LMT Rice + 91.20 LMT Wheat) have been allocated to States/UTs for the month of  July to November, 2021 over-and-above monthly subsidised NFSA foodgrains of 35 Kg per AAY household per month and 5 Kg per PHH person per month.

He informed that, as on 5th July, in PMGKAY-3, total 88.9% i.e 70.6 LMT food grains have already been distributed among beneficiaries

During the conference, it was informed that awareness and outreach initiatives have been undertaken to sensitise  beneficiaries about entitlement of free foodgrain under PMGKAY, over and above regular NFSA foodgrains .This has been done through creatives for Posters/ Banners/ Hoardings –in Hindi & 10 regional languages. States/UTs have been asked to initiate awareness activities of PMGKAY and ONORC –through all FPSs, Godowns and other PDS/Government offices. Other central Ministries/Departments have also been requested on similar lines.

While briefing about the ONORC scheme, Shri Pandey informed that ONORC is now fully enabled in 32 States/UTs and remaining states are expected to enable ONORC in near future. He informed that an average 1.5 Crore monthly portability transactions are being recorded under ONORC.

Almost 1.4 Crore, 1.5 Crore and 1.35 Crore portability transactions during April, May and June 2021 respectively, delivered both NFSA and PMGKAY foodgrains in the tune of approx. Rs. 3,500 Crore in food subsidy.

While answering a question from media about deletion of bogus ration cards by States/UTs, Shri Pandey said that the deletion and addition of Ration cards are States/ UTs prerogative and many States and UTs are doing good work by weeding out the bogus ration cards holder from the list of NFSA beneficiaries. He said this will ensure that entitled beneficiaries get the benefit of the food grains schemes.  He further added that Department will very soon finalize a modal guideline based on suggestions received from States/UTs, for common list of factors for inclusion and exclusion of Ration Card beneficiaries after due deliberation with States and other Ministries and concerned Departments.