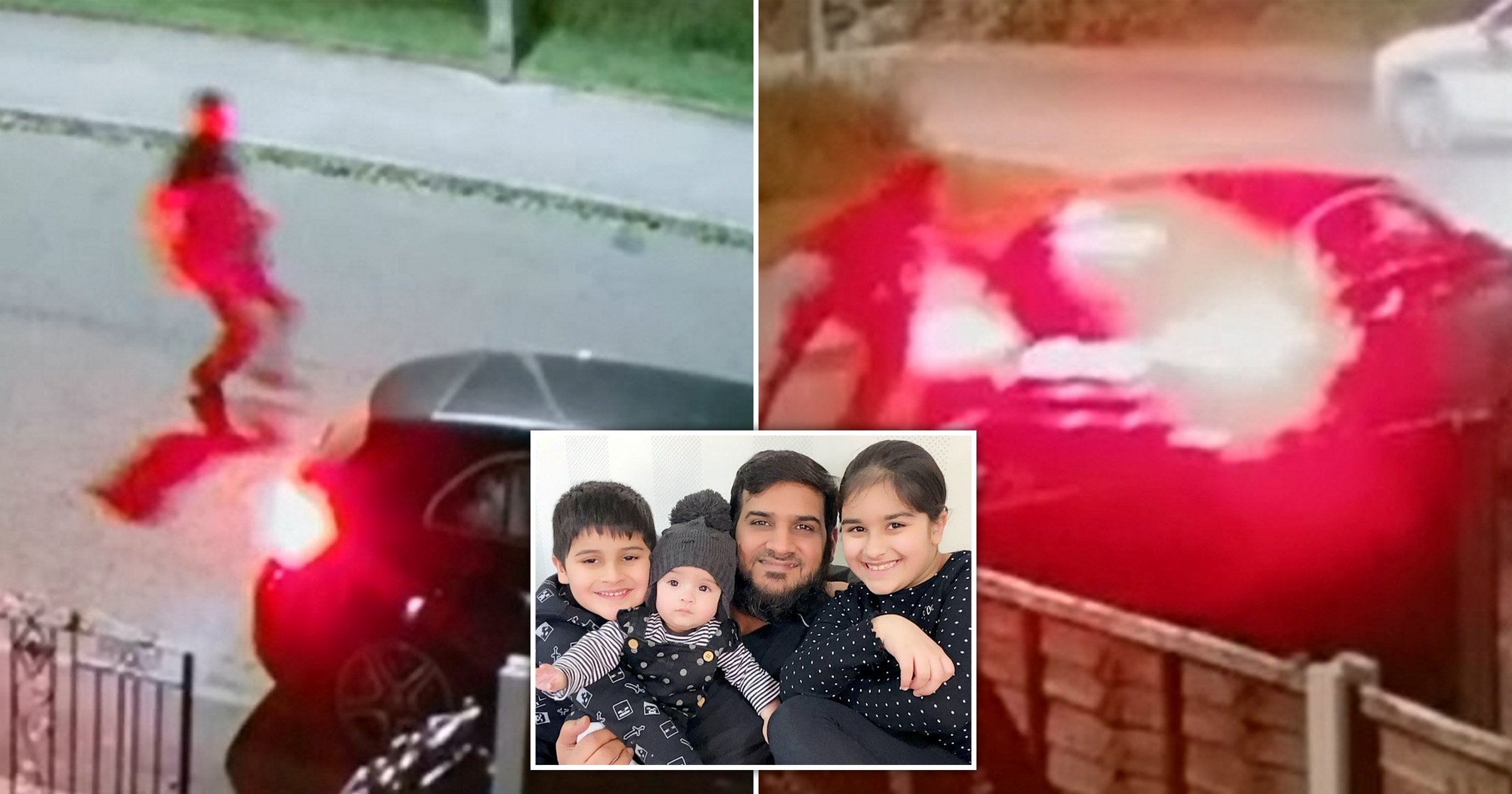 A dad got out of his car for ‘seconds’ to speak to his wife – then a man climbed into the driver’s seat and sped off with three children asleep in the back.

Zahid Nazir, 37, and his family were returning from a wedding just before 3am last Tuesday. In the brief time Mr Nazir left his kids to chat to his wife Sabahat, who was arriving home in a different car, a thief crept into his car and drove off.

Thankfully Mr Nazir found his Mercedes and his children, shaken but unharmed, on a country road later that morning.

With eight-year-old Khadlijah, seven-year-old Muhammad Ahad and 10-month-old Ayesha still inside, the driver starts the car and heads down the street.

When Mr Nazir realises what is happening, he desperately runs after his kids but loses his balance and falls onto the road.

He said: ‘I couldn’t believe it when I turned around and saw the car driving away, I was in total shock.

‘I barely had time to think when I just ran off after the car, I knew I had to try and stop whoever was taking my children away.

To view this video please enable JavaScript, and consider upgrading to a web
browser that
supports HTML5
video

‘After that, I felt very panicked and worried about what had happened, I didn’t understand what was going on.’

Refusing to give up, the dad jumped into his wife’s car hoping to find his family – but he had no idea which way the thief had driven.

He happened to pass a police officer and asked for help. The pair realised Mr Nazir’s wife’s phone was still in his Mercedes and they used Find My iPhone to track it down.

This is what led them to the children who had been left in the car on a nearby quiet street, in Bolton, Greater Manchester.

Mr Nazir said: ‘I was so happy they were okay. When I saw my kids I just started crying. I didn’t even run to them to begin with, I just cried.’

Although everyone was ‘physically fine’, the family have struggled to sleep because they are so fearful.

Mr Nazir said: ‘We spent a few nights at someone else’s house because it was too scary to stay here.

‘I’ve even thought about selling the house and the car to try and keep everyone safe, it’s a horrible situation to be in.’

Police say the attempted theft was opportunistic, but Mr Nazir thinks it was planned.

The dad, who runs a takeaway, said he usually gets home from work around that time. He believes the man planned to steal his car but abandoned the plot when he realised he had ‘kidnapped’ children.

Police have not yet made any arrests and are still investigating.

Get in touch with our news team by emailing us at webnews@metro.co.uk.

For more stories like this, check our news page.

Get your need-to-know
latest news, feel-good stories, analysis and more