Dr. Dre’s Kids: Everything To Know About His 9 Children & Their Mothers 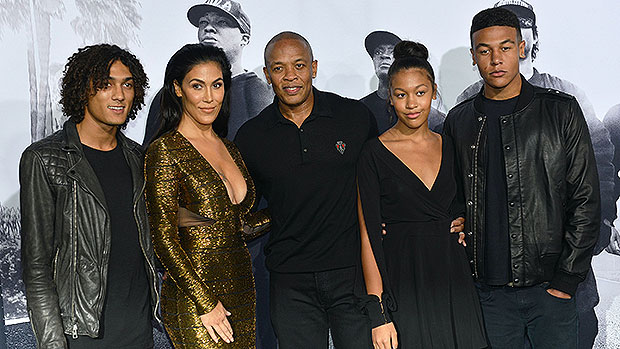 Dr. Dre (born Andre Young), 56, is not only a successful rapper in the music industry, he’s also a father to nine children that he welcomed throughout the years. Although some of his kids, who he had from various previous relationships, enjoy the spotlight and are easily seen out and about and/or on social media, the others tend to be private and keep to themselves. We’re taking a look at each one of the producer’s four sons and five daughters as well as their mothers below.

Curtis is Dre’s first born child. He welcomed the son with 15-year-old Cassandra Joy Greene, his girlfriend at the time, when he was 16 in Dec. 1981. Cassandra ended up being the one to raise Curtis and Dre didn’t meet him until 20 years after his birth. Despite the years apart, Curtis seemed to follow in his father’s footsteps when he became a rapper under the name Hood Surgeon. He started releasing albums and mixtapes in 2006 and in July 2021, it was reported that he was getting ready to star in his first movie role for the film, Charge It to the Game.

Curtis is also married to a woman named Vanessa and they reportedly have two sons together.

LaTanya is Dre’s oldest daughter with his ex Lisa Johnson. She was born in 1983 and is one of three girls he had with Lisa. Since her birth, LaTanya hasn’t been in the spotlight that much, but in Dec. 2020, she claimed she hadn’t seen her dad in 17 years and said he had never met her four children, his grandchildren. In Aug. 2021, she also claimed she was struggling financially and living out of her car while working for delivery services like DoorDash and Uber Eats. She told the Daily Mail that the only way she can contact Dre is through his attorney and although he has helped her with rent and expenses in the past, he allegedly stopped in Jan. 2020 because she talked to the press about him.

“My kids are staying with friends – they are not living in the car, it’s just me,” she told the outlet. “I’m taking odd jobs just to make it now – I got paid $15 an hour as an assembler at the warehouse. I’m trying to keep my head above water. I’ve been in debt for a while.”

Tyra is reportedly Dre’s second oldest daughter. She was reportedly born to an unidentified woman during Dre’s relationship with Lisa in May 1984. She is perhaps the most private of all of his children and not much is known about her since she doesn’t seem to have any social media accounts and hasn’t spoken to the public.

LaToya is reportedly Dre’s third daughter and fourth child. She was reportedly born to him and Lisa in Sept. 1984 but not much is known about her. Her mother gave an interview to someone on YouTube in 2010 and said that LaToya is one of two “secret daughters” that she had with Dre even though he previously only confirmed LaTanya to be his. When asked why Dre doesn’t talk about his other two daughters, Lisa said, “I’m not sure why but in due time you will get that real story.”

Ashley is reportedly Dre’s fourth daughter and fifth child. She was born in 1985 and was also mentioned in Lisa’s YouTube interview. Like LaToya, not much else is known about her and Dre hasn’t confirmed her to be his daughter either.

Andre Jr. was Dre’s second son and sixth child. He was born to him and Jenita Porter in 1988 but sadly passed away in 2008 when he was just 20-years-old. He was reportedly discovered in bed by his mom at the time of his death and the cause was ruled to be an overdose of heroin and morphine, according to the Los Angeles coroner. “Dr Dre is mourning the loss of his son Andre Young Jr. Please respect his family’s grief and privacy at this time,” a spokesperson for Dre said in a statement at the time.

Before his death, not much was known about Andre.

Marcel is Dre’s seventh child. He welcomed him with singer Michel’le, who he was dating at the time, in 1991. Like some of his older siblings, he likes to stay out of the spotlight. His parents’ relationship was resurrected in the 2016 Lifetime movie, Surviving Compton and although Michel’e, who also has a daughter named Bailei Knight, is still in the spotlight with her music career, she keeps details about her son generally private. Once in a while she’ll post random photos of him on her Instagram, like the throwback one above.

Truice is the youngest son of Dre and his ex-wife Nicole Young, whom he was married to from 1996 until 2020. He was born in 1997 and grew up in Los Angeles before attending and later graduating from the University of South Carolina. Like his dad, Truice works in the music industry as a producer and has worked with various artists. He often posts pics of himself and his family on Instagram and seems to live an eventful life.

Truly is Dre and Nicole’s youngest child. She was born in 2001 and often attends events with her family. As of 2021, she was studying at the University of Southern California and is very active on social media. She often posts epic photos of herself modeling in various outfits and in various places and has a large following of over 130,000 followers.