FOOD ORIGINS: Find the roots of where nourishment comes from as Stellenbosch gets green fingers 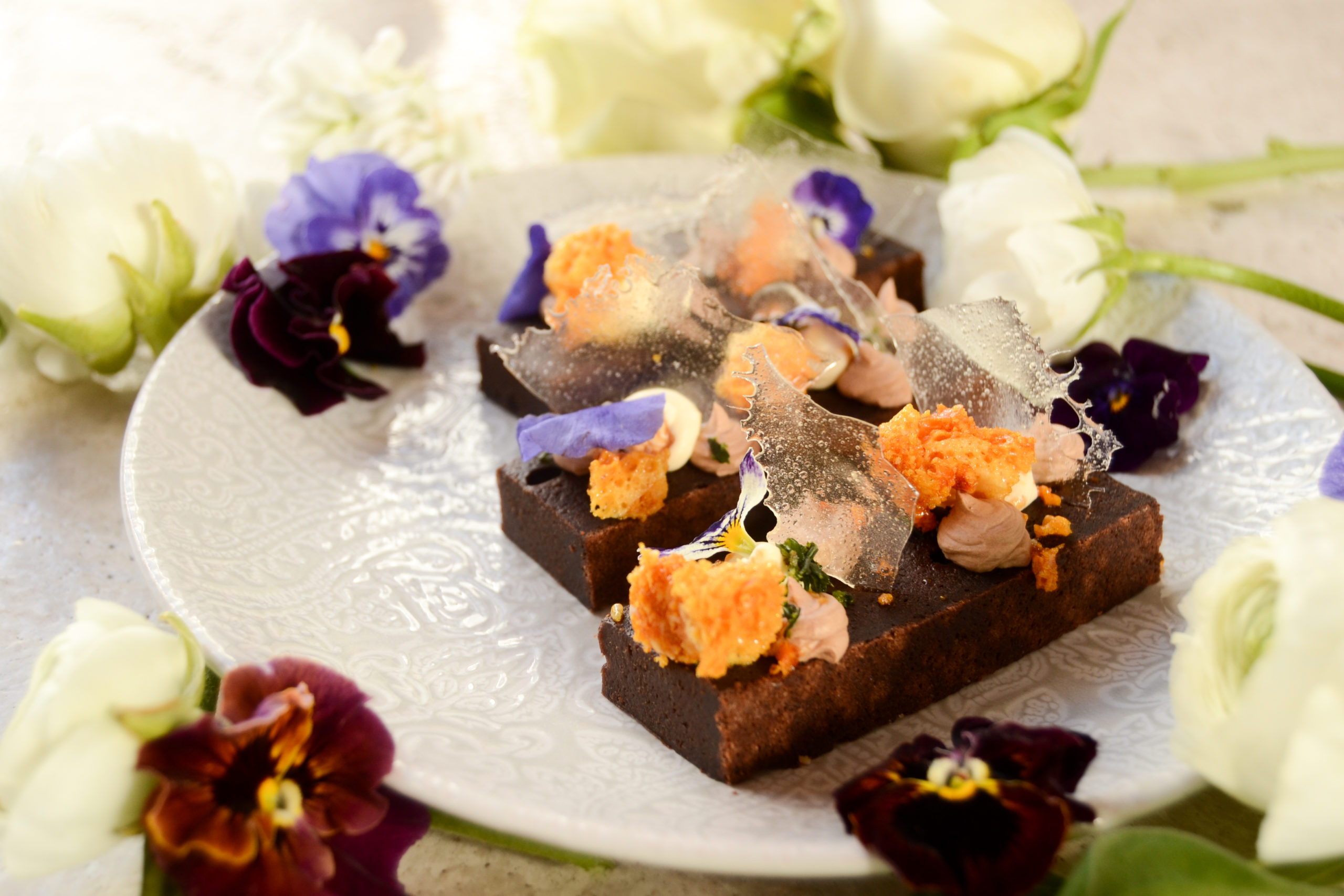 An inaugural garden week in the university town of Stellenbosch, inspired by a Catalonian flower festival, will showcase nature through talks, tours, art, wine and food.

There’s a famously funny – and tragic at the same time – story about a survey some years ago by Innovation Center for US Dairy which reported that 48% of adults didn’t know how chocolate milk is made, and 7% think it comes from brown cows. It’s good for a laugh at Murica’s expense but the sample group was a mere 1,000 and perhaps a bit unfair to apply to the country’s millions of citizens.

Point is, where does our food come from? The simple answer is: a garden. It can be a container on your city apartment’s balcony, a patch out back, or on the side of the road. It can be a great big farm garden with multiple crops, or a few carrots and lettuces. Cows, brown or otherwise, should be roaming a garden of sorts, munching the grass (not in depressing feedlots); and the wine in our glasses comes from vineyards, which are also gardens of grapes. Gardens are important.

From September 30 to October 10, Stellenbosch is hosting its first Garden Week festival, inspired by the flower festival in Girona, Catalonia, Spain, a spring event. And yes, it’s now safe to say it’s officially spring here as the southern hemisphere equinox happened on Wednesday, September 22, 2021. During these 10 days (which doesn’t sound quite as catchy as “week”), visitors to the winelands city of oaks will be able to immerse themselves in garden-related activities from horticultural tours to landscape art, hiking to dining.

There will be installations by landscapers and local botanical artists at landmarks throughout town; storefronts as well as local wine farms will echo the theme with special offers, floral designs, and greenery. Accommodation specials will attract those who want to stay longer than a day. Public gardens include the historic Old Nectar estate in the Jonkershoek Valley; the Dylan Lewis Sculpture Garden in Paradyskloof, which is one of the best things I’ve done in Stellenbosch that didn’t include wine (I visited during one of the alcohol bans so I didn’t really have much choice); Spier; and Delaire Graff Estate. Twenty private gardens will participate too, giving visitors a rare glimpse of exquisite and usually inaccessible spaces.

If you’ve not been, Stellenbosch Botanical Gardens is a lovely baby sister to Kirstenbosch, and has compiled a programme of daily walks and talks. Workshops will be presented at the Rupert Museum; Blaauwklippen off the R44; Jordan Wines; Spier Estate and Babylonstoren. A flower parade on September 30 will herald the official beginning of the festival, and the whole thing – outdoors, warmer weather, the bleak winter we’ve had – should be a tonic and a balm.

Because gardens and food are intrinsically intertwined, along with the opportunities of rambling through the foliage is the eating of the locally grown fruits, roots, herbs and vegetables.

Spier Estate, for example, invites you to tour its new food garden which is dedicated to supplying all the food outlets on the farm as well as some external traders and restaurants.

“Veggies can be very sexy,” laughed food garden agroecologist Megan McCarthy. “More people must grow them between their ornamentals.”

Two workshops have been held this year, for compost making, urban food production, and an introduction to permaculture in an urban environment. The third one on October 2, hosted by McCarthy, will cover horticultural propagation, how to make cuttings, and a bit of an intro to grafting and budding, she said.

“I studied horticulture so I’m passionate about any form of plant. I think what I’m really excited about is the tour with nursery manager Wilton Sikhosana. He will take people on the River Walk which is really special and I encourage people to try to visit Spier at least once every season because there’s always something magical to see,” said McCarthy.

On October 6 and 9, the food garden tours will include harvesting, which means you can pick and fill your bag or basket with vegetables straight from the earth. In season now are carrots, lettuce, Swiss chard, kale, baby fennel, baby beetroot, broad beans, radish, turnips, and baby leeks. That was just off the top of McCarthy’s head.

Chef Hennie Nel, who does the pairing menus, picnic menus, takeaways menus, and sit down menus – so, all the menus – is looking forward to the easy accessibility the new garden will afford him and his team as they gain a better understanding of the growing seasons.

“It’s always good to incorporate seasonal veggies. Our current vegetarian and vegan picnic baskets have a variety of Megan’s seasonal crudités with dips. Given our setup with the ready meals and retail shop, we incorporate most of the veggies into salads, soups and frozen meals. We also have a braai popup on weekends which makes playing around with braai veggies an option,” he said. “Masala veggie burgers are a hit.”

Vadas Smokehouse & Bakery (pasteis de nata to kill for) has created a garden platter with radish  and green beans; Caesar salad with bokkoms and Farmer Angus eggs; baby beets with goat’s cheese and strawberries; baby carrots with labneh and za’atar; and courgettes with harissa – all from the garden and local suppliers.

“I love playing around with pickles, chutneys and Cape Malay inspired flavours like bobotie. My chutneys and pickles are available in the shop. We’re also running a heritage tasting at the wine centre with flavours like pampoen poffertjies and amasi gel topped with raisin chutney.”

The full Spier line up, including children’s activities, is here.

On October 1, 2021, Vine Bistro at Glenelly has a vineyard walk planned, followed by a set menu dinner. The walk will be marked and self-guided, with a “little glass of rosé and maybe some cheese straws, as an aperitif”, said chef Christophe Dehosse.

During winter he’s been running weekly dishes which are traditionally French but ones you get at home and not normally in restaurants. Pot au feu was one, and from September 28 to October 2, it will be quenelle de poisson sauce nantua – fish mousse which is poached then baked in the oven, served with shellfish sauce (usually freshwater crayfish but we don’t get that here so Dehosse will use prawns), pilaf rice and spring vegetables. Other than October 1, when it is joined by saffron infused mussel soup to start and strawberry tart to end, the quenelle can be ordered as a main course with anything else a la carte.

The recipe is originally from Lyon, which is well known in French food, because, Dehosse said, “Lyon is the capital gastronomie of France, therefore the world – because France is the world!” He laughed. “Naturellement,” I laughed too.

France or the world, Lyon was where chef Paul Bocuse, known for the high quality of his restaurants and his innovative approaches to cuisine, was based. It’s also where some of the first women had their own restaurants, where they served cuisine bourgeoise. Eugénie Brazier (12 June 1895 – 2 March 1977), known as “la Mère Brazier”, was a French chef who, in 1933, became the first person awarded six Michelin stars.

“Lyonnaise food is actually very simple, and the quenelle doesn’t come more Lyonnaise than that. In French culture, it epitomises Lyonnaise food and we should never forget where food comes from,” said Dehosse.

At Lanzerac, executive chef Stephen Fraser, who also has access to a relatively newly planted garden on the farm – as in this past winter – will be bringing herbs, fynbos and florals to his plates to give classic dishes a modern feel.

“Our Saturday afternoon tea will have more floral elements on both the sweet and savoury side. We’re working on hibiscus teas and infusions, and Turkish delight using different flowers. There’s a lot of experimentation going on – pickling, preserving and fermenting,” he said.

Afternoon tea will be served every day during the festival, and set menu dinners on Fridays and Saturdays paired with Lanzerac’s Heritage range of wines. DM/TGIFood

The writer supports the Gift of the Givers Foundation, the largest disaster response, non-governmental organisation of African origin on the African continent.