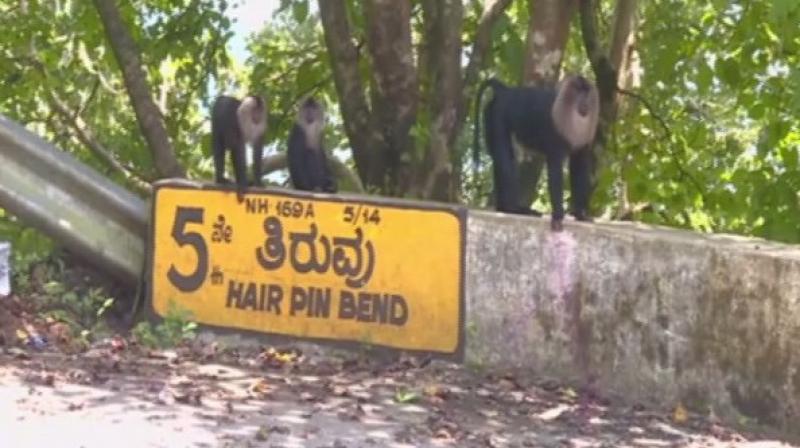 Shivamogga: In view of the shrinking forest cover and absence of native trees, lion-tailed macaques (LTM), an endangered species residing in rainforests of Western Ghats, come up to the hairpin curve of Agumbe ghat in Shivamogga to get food thrown by travellers.

Ajay Kumar Sharma, an environmentalist, lamented the condition of these species and said that though the sight seems beautiful to the travellers, it is sad to see these LTMs like this.

“LTMs are known to be shy animals. They reside on the high canopies of native trees. Now the forest department has replaced the native trees with Acacia and Nilgiris. These animals do not even have food in the forests. So there is a drastic behavioural change in them. It is very disheartening to see them wait by the side of roads for travellers to throw a packet of chips,” he said.

Sharma added that the Deputy Conservator of Forest of Someshwara Wildlife Sanctuary has passed an order for the travellers to not stop at Agumbe ghat. “But that is not the solution. Rather than stopping the travellers, the authorities should make sure that these animals get enough food in the forest so that they do not have to depend on anyone,” he stated.

“LTMs are the pride of the Western ghats of Karnataka and Shivamogga. They are on the verge of extinction. We should do something for them,” added Sharma.

Shashi Bhushan, a villager in Agumbe, blamed the forest department for the plight of LTMs and requested the authorities to do something for these animals.