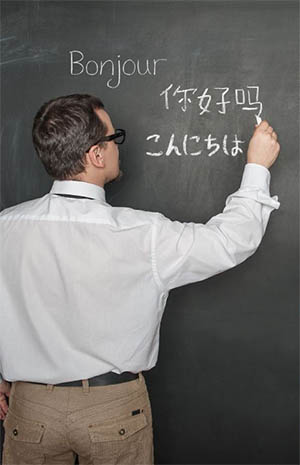 The fact that this academic year will not see a single new Mandarin teacher in the country’s public schools has recently grabbed headlines, but the reality is that students are abandoning all foreign languages.

Demand for foreign languages tends to be dictated by the university entrance exam and Korea’s top trading partners.

Prof. Kwon Oh-hyun at Seoul National University, said, “After Korea was liberated from Japanese colonial rule Korea had no diplomatic relations with Japan and had yet to form ties with China, so foreign language education began with German and French.”

“In the 1960s and 1970s, Germany provided a lot of economic aid to Korea, and we sent coal miners and nurses to Germany, which increased the popularity of the language. In the 1990s, Korea opened its doors to Japanese culture and formed diplomatic ties with China, leading to a surge in Japanese and Mandarin classes,” he added.

Kim Min-ja, a Japanese teacher at Cheongdam High School, said, “There was a surge of interest in Japanese among youngsters around 15 years ago, followed by soaring interest in Mandarin. But these days, many schools teach computer coding instead of languages. Foreign language education in Korea is swayed by the current of the times.”

Im Seung-kyu, vice principal and Mandarin teacher at Yushin High School in Suwon, Gyeonggi Province, said, “The event that led to a drastic decline in the popularity of foreign languages was a revision to the school curriculum in 2007 that made foreign languages optional. In another round of revisions in 2009, foreign languages were grouped with cultural studies” which led to a further decline in popularity. “Foreign languages are considered increasingly important for diversity and multiculturalism around the world, but Korea’s educational system is regressing,” he added.

On top of that, the foreign-language section of the university entrance exam is being graded on an absolute scale from this year, so good grades are more difficult to get than in some other subjects. From 2023 high schoolers can pick their own subjects, which can only work to the detriment of second foreign languages

One 17-year-old high school boy in Seoul said, “You have to spend more time studying foreign languages than other subjects, so if they’re no longer mandatory I don’t feel the need to take them.”

Arabic is one subject that illustrates the problem. Only four or five schools in Korea teach Arabic. Kyunggi High School in Seoul has been teaching it online since 2018, but only six students take the class, none of them from the school. Yet every year thousands of students signed up for the language in the university entrance exam because it was easy to get a relatively good score given how limited everyone’s proficiency was.

But now foreign languages are being graded on an absolute scale, the number of applicants for Arabic has fallen from 52,443 last year to 15,724 this year, and even then it is still the most popular language.

But one Mandarin teacher said, “I believe the Chinese Embassy has complained, and the trend probably has to do with worsening relations between Korea and China.”

Others say everything is a question of grades. Lee Sun-young, a high school teacher, said, “Everything is geared toward university entrance and grades are the only motivating factors for students.”

Too much emphasis on English is also to blame. Jung Hyung, a professor of Japanese at Dankook University said, “Foreign language classes give students an opportunity to learn about foreign cultures. Korean has become popular overseas thanks to the Korean Wave, but this one-way popularity could face limitations. We need to let students learn to embrace other cultures by offering balanced foreign language options.”