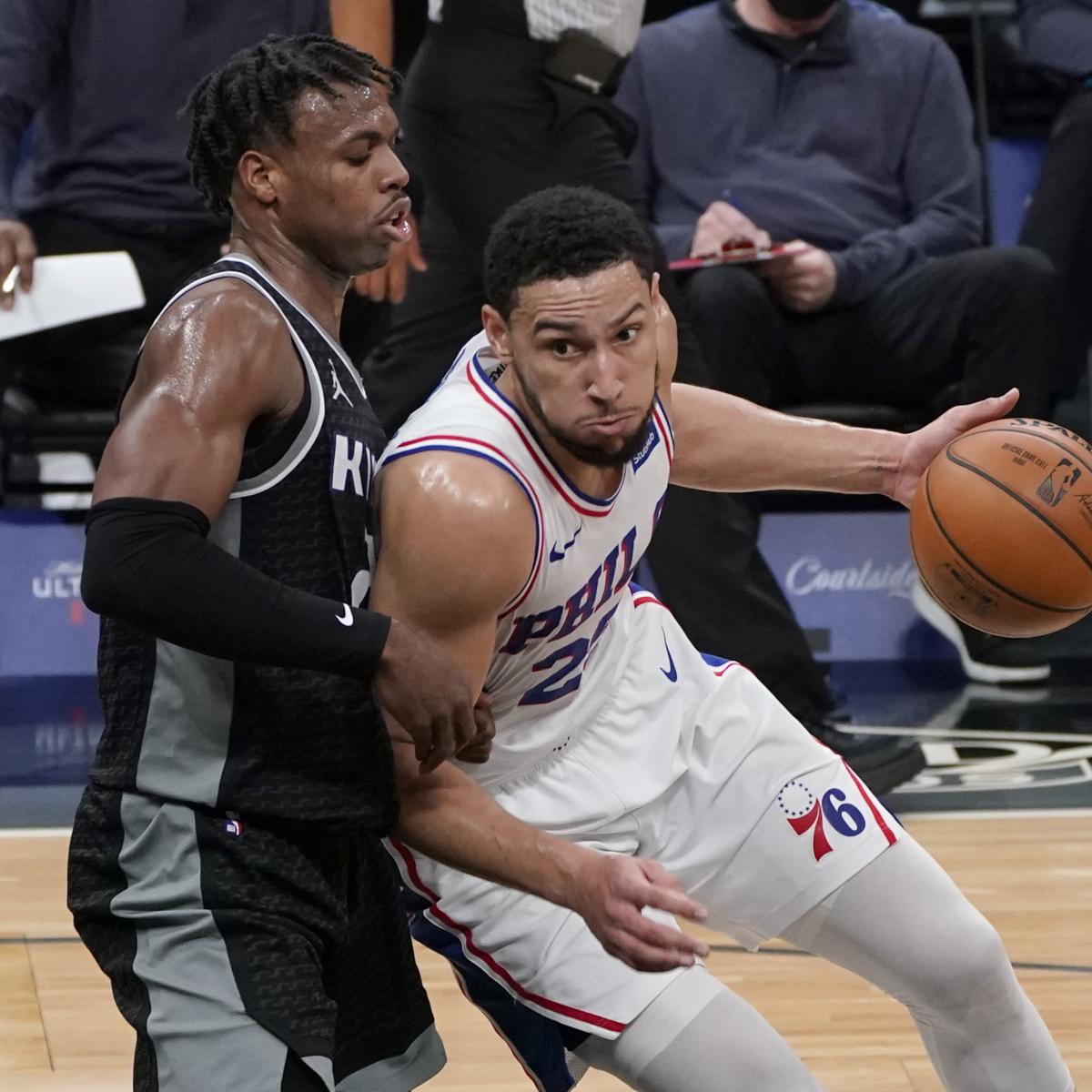 Save for the rare squad processing its way through a radical rebuild, most NBA franchises don’t want to live in the lottery.

While some understand they may be facing an extended stay, most are searching for an escape hatch.

We’re here to help the latter by orchestrating offseason trades that would deliver four 2021 lottery teams to the 2022 postseason.

No lottery team feels a tighter time crunch than the Warriors. They just watched Stephen Curry take bronze in the MVP race and Draymond Green do the same for Defensive Player of the Year. Throw a hopefully healthy Klay Thompson into the mix, and Golden State thinks it could have a title-winning trio.

“If those three guys are on the floor together, I’m not afraid of any team in the NBA,” Warriors president of basketball operations Bob Myers said, per Connor Letourneau of the San Francisco Chronicle.

Of course, other teams aren’t afraid of the Warriors right now, either. If that ever happens, it won’t be until Thompson proves he’s healthy after consecutive seasons lost to injury and the rest of this roster is brought into championship shape.

This trade would be a big step in that direction.

The Warriors can’t wait for James Wiseman to grab control of the center spot, and they know Kevon Looney isn’t a needle-mover there. But Myles Turner could be. He’s an elite shot-blocker who can defend away from the basket and spread the floor on offense. He could add a dimension to the Dubs as an interior anchor without taking anything away.

Pair him with Green, and Golden State would have two of the best stoppers in the sport. The Warriors would also have the kind of sweet-shooting big who could keep the middle clear for Curry and Green to work their high pick-and-rolls. Add a few depth pieces, and they could be off and running toward another title.

As for the Pacers, the exchange would grant them better roster balance by clearing the frontcourt and adding another wing defender to the mix with Kelly Oubre Jr. Throw in the 14th pick—which would give Indy back-to-back picks to close out the lottery—and the Pacers would have avenues to more prospects or trade chips to cash in at a later date.

The Bulls are upgrading at point guard this offseason. What are the chances that other avenues at the position lead to a better player than a healthy Kemba Walker?

The quick counter, of course, is Walker spent all of 2020-21 battling a balky left knee, so he isn’t healthy. But the Bulls wouldn’t be paying for a healthy version of Walker here. Frankly, they’re barely being charged for the possibility he could get right.

While OKC might see value in seeing what Coby White, the No. 7 pick in 2019, can become, the Bulls don’t have that kind of time. Without an extension, Zach LaVine will hit free agency in 2022, and Nikola Vucevic will follow in 2023. Chicago needs to make a playoff appearance before then, ideally to convince LaVine to stay, but really just to have something to show for the deadline deal for Vooch that cost two first-round picks (including this year’s No. 8 overall).

Put a healthy Walker in the Windy City, and Chicago would have the backbone of what should be a top-10 offense and what could be a top-four seed in the Eastern Conference.

Between him, LaVine and Vucevic, the Bulls would have three 20-point scoring threats who all space the floor and create offense for others. Having them carry the torch would allow Patrick Williams to continue developing at his own pace and perhaps emerging as a three-and-D ace. Throw in Thaddeus Young as the Swiss Army knife, and Chicago’s first five could cover all bases.

Considering what the Thunder previously received for Chris Paul and Al Horford, they could actually hold out for more with Walker. But with the threat of his knee issues, they might cut bait now to get a look at White alongside Shai Gilgeous-Alexander and see what they could fetch from a contender for the plug-and-play pair of Tomas Satoransky and Al-Farouq Aminu.

CJ McCollum might be the second fiddle in Portland, but that’s only because he shares a roster with Damian Lillard. Move McCollum to the Circle City, and his shifty shot creation and feathery touch could prop him atop a Pacers offense that features several really good scoring sources—but maybe not a great one.

That would be the impetus for Indy to pounce.

Domantas Sabonis keeps getting better, and Caris LeVert is slicker than an oil spill, but they haven’t controlled an offense the way McCollum can. Before a fractured left foot robbed him of two months, he was busy peppering opponents with 27.6 points per game on 47.0/43.4/84.4 shooting across his first dozen contests of the campaign.

Adding that kind of weaponry could be what props up the Pacers into the East’s heavyweight class, or something close to it. McCollum could lead the scoring charge, Sabonis would handle primary playmaking duties, LeVert would do a little (sometimes a lot) of both, Myles Turner would still anchor the interior and newly named coach Rick Carlisle would consistently put the puzzle pieces in the right place.

That may not be a championship contender, but there might be enough to host a first-round series and book the franchise’s first trip to the conference semis since 2014.

The Blazers, who parted with coach Terry Stotts after four first-round exits in the last five years, would continue their transformation around Lillard by turning his longtime backcourt mate into potentially better fitting parts. Malcolm Brogdon (6’5″) offers more size and defensive resistance with a similarly fiery three ball, and T.J. Warren would be a welcome addition to Portland’s perennially underwhelming forward rotation.

Ben Simmons’ trade market is murky for a lot of reasons, not the least of which was his vanishing act from this postseason. It’s not clear if he’ll be available—the Sixers still want to keep him “as a central piece of their franchise,” per ESPN’s Adrian Wojnarowski—and even if he is, it’s hard to say what type of team would have interest.

Win-now shoppers might not want to do the roster reshuffling potentially required to optimize Simmons. Long-term rebuilders may have little interest in adding a soon-to-be 25-year-old owed $146.7 million over the next four seasons and could lack the instant-impact assets Philly would presumably covet.

This could be the one time where it’s beneficial for Sacramento to be stuck in the middle.

Trapped in a record-tying 15-year playoff drought, the Kings could feel similar desperation to win sooner than later, yet they’re still flexible enough to tailor their roster around Simmons. Plus, they have things the Sixers might legitimately want: Buddy Hield’s fiery three-point stroke, Marvin Bagley III’s offensive upside and a top-10 pick to either keep and develop or use to facilitate another trade.

Sacramento, meanwhile, may not need to adjust too much to accommodate for Simmons.

Kings coach Luke Walton gives his club the run-and-gun green light, and Simmons will do the running if his teammates do the gunning. His drive-and-kick dimes and transition deliveries could pile up points in a hurry, as De’Aaron Fox, Tyrese Haliburton, Harrison Barnes and Terence Davis all shot better than 39 percent on catch-and-shoot triples. Simmons could then work two-man magic with Fox as a screen-setter and off-ball cutter.

Tack on the badly needed boost to Sacramento’s worst-ranked defense, and the Kings could have enough to make their long-awaited postseason return.

Stats courtesy of NBA.com and Basketball Reference unless otherwise noted.