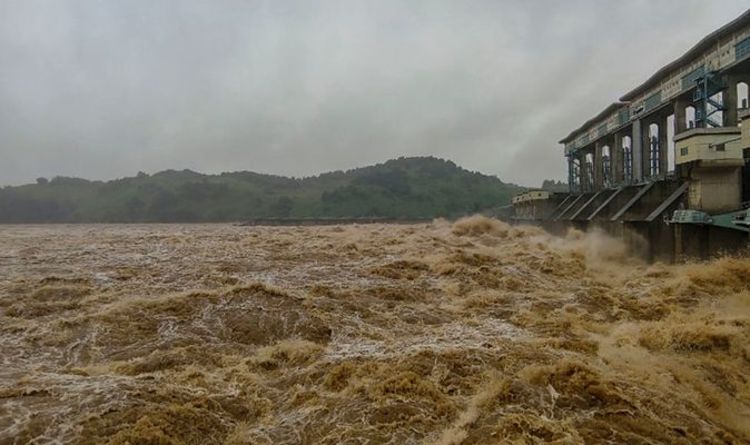 We use your sign-up to provide content in ways you’ve consented to and to improve our understanding of you. This may include adverts from us and 3rd parties based on our understanding. You can unsubscribe at any time. More info

Residents have fled their homes after heavy rains decimated huge swathes of farmland. KRT, the country’s state broadcaster, reported around 5,000 people have been evacuated and more than 1,000 homes have been destroyed.

It comes as the impoverished North admitted it was tackling a food crisis in June, sounding the alarm in a country which has long struggled to feed itself.

The report said “hundreds of hectares of farmland” is submerged or lost in the country’s South Hamgyong Province after river levees collapsed.

Due to the nation’s weak infrastructure and deforestation efforts, flooding has had a great impact on the isolated country.

In June, leader Kim Jong-Un said the nation faced a “tense” food situation and much would depend on this year’s harvests.

Last month, the UN’s Food and Agricultural Organisation forecast said North Korea was facing a food shortage of around 860,000 tonnes this year.

The organisation warned the country could experience a “harsh lean period”.

He said: “We expect more rain in August in various regions, including the east coast area, which may cause further damage.”

Footage from Pyongyang’s state-run KCTV showed homes flooded up to their roofs as well as damage to bridges and dikes.

North Korea is currently under a self-imposed isolation due to the coronavirus pandemic, and as a result trade with Beijing – its economic lifeline – has slowed to a trickle.

In light of the impending crisis, US secretary of state Antony Blinken made contact with South Korean foreign minister Chung Eui-yong to discuss the prospect of humanitarian aid to North Korea.

Their offices have not yet elaborated on the idea following their phone call on Friday.