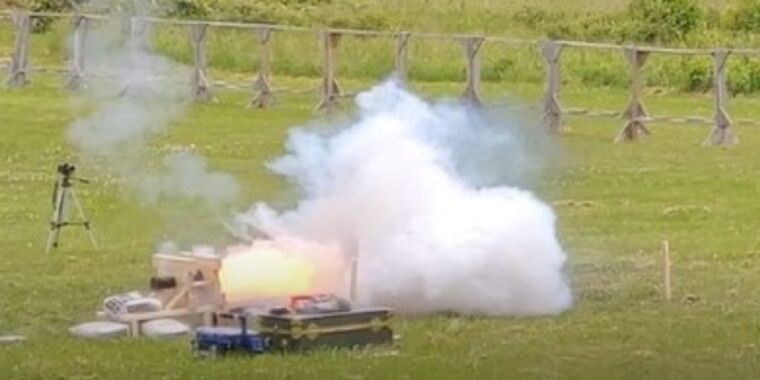 Gunpowder—as opposed to modern smokeless powder—isn’t used much these days in current weaponry, although it’s still useful for historical weapons and remains popular for fireworks and other pyrotechnics. An interdisciplinary team of chemists and historians wanted to learn more about how various recipes for gunpowder evolved over the centuries as master gunners tweaked the basic components to achieve better results. The researchers described their findings in a recent paper published in the journal ACS Omega. They even tested a few of the recipes by firing a replica of a 15th-century stone-throwing cannon at a West Point firing range—you know, for science.

Also known as black powder, gunpowder is simple enough, chemically speaking. It’s a mix of sulfur and charcoal (carbon), which serve as fuels, and potassium nitrate (KNO3), an oxidizer also known as saltpeter. First used for warfare around 904 CE in China, its use had spread throughout Europe and Asia by the late 13th century. Modern black powder recipes call for 75 percent saltpeter, 15 percent charcoal, and 10 percent sulfur. But medieval master gunners experimented with many different recipes over the centuries, many of which included additives such as camphor, varnish, or brandy—the purpose of which is still unknown.

By the late 14th century, manufacturers had discovered that one could improve the performance of gunpowder through a wet-grinding process called “corning.” Some kind of liquid (often distilled spirits) would be added as the other ingredients were being ground together, producing a moist paste. The paste would be rolled into balls and then dried, and those balls would be crushed in a mortar by a gunner in the field right before it was used.

So-called serpentine dry-mixed gunpowder was most commonly used in Europe during the 15th century. Standard procedure involved grinding the ingredients together with a mortar and pestle, and reducing those ingredients to a fine powder could take as long as 24 hours. The smaller the particle size and the more thorough the mixing, the more rapidly and effectively the gunpowder will burn.

Co-authors Dawn Riegner and Clifford Rogers, a chemist and historian, respectively, at the US Military Academy (aka West Point), decided to analyze the energies released just before and during combustion by different kinds of gunpowder recipes from the medieval period. Along with their other co-authors, they hoped to better understand the intent behind the creation of the various formulations and to learn more about the technical details of early gunpowder manufacturing processes.

First, they identified more than 20 different recipes recorded in medieval texts from between 1336 and 1449 CE and followed those recipes to make their own different batches of gunpowder. Riegner et al. tested both serpentine and corned samples, using bomb calorimetry to record the relative heats of combustion and reaction rates. They used differential scanning calorimetry to measure the onset of combustion (preignition), and how quickly combustion spread, as well as analyzing the residues for each of the recipes to determine the effectiveness of combustion. The team also compared the different sample preparation methods and the effectiveness of recipes with and without additives, as well as conducting the firing-range cannon experiments.

The team found that, between 1338 and 1400 CE, recipes increased the percentage of saltpeter and decreased the amount of charcoal. This would have resulted in lower combustion heat but would also have been safer for medieval gunners on the battlefield. After 1400, gunners tweaked the relative components a bit more, decreasing the saltpeter a little and sightly increasing the sulfur and charcoal, perhaps to find the optimal balance between gunner safety and combustion heat.

“The need for safer recipes”

“It has been suggested that one reason gunpowder recipes changed over time is the need for safer recipes that did not put medieval gunners at risk or cause damage to cannons,” the authors wrote. The fact that the two oldest recipes they tested had the highest heats of combustion seems to support that hypothesis. “Gunners may have stopped using these recipes because they had such high levels of thermodynamic activity,” they added.

As for the additives, most didn’t produce noticeable increases in the energy produced, save for a combination of camphor and ammonium chloride. The authors suggest that water or brandy, for instance, may have served some other purpose that perhaps further research could reveal.

“It is clear that medieval master gunners had developed, at least in some respect, a solid practical understanding of the variables that affected the effective power output obtainable from gunpowder charges, including purity of ingredients, varieties of charcoal, grain size, and methods of mixing,” the authors wrote. “They understood, for example, that a cannonball was thrown by gas pressure, not flame, and that willow charcoal prepared in a closed container was far superior to oak charcoal made in a traditional pit.”

However, Riegner et al. also noted that progress toward achieving the ideal ratio of ingredients was slow, occasionally taking a step back, which they attribute to the physical changes taking place in the artillery used over the same period (gun size, types of shot and powder charge, for instance).

More research is needed to determine which is the best recipe for specific historical contexts, according to the authors. They plan to conduct further studies with different techniques that will help them compare the surface area and spacing between ingredients of the various recipes, which should shed more light on medieval processing methods, especially corning.

44 Vegan Thanksgiving Recipes Everyone Will Love