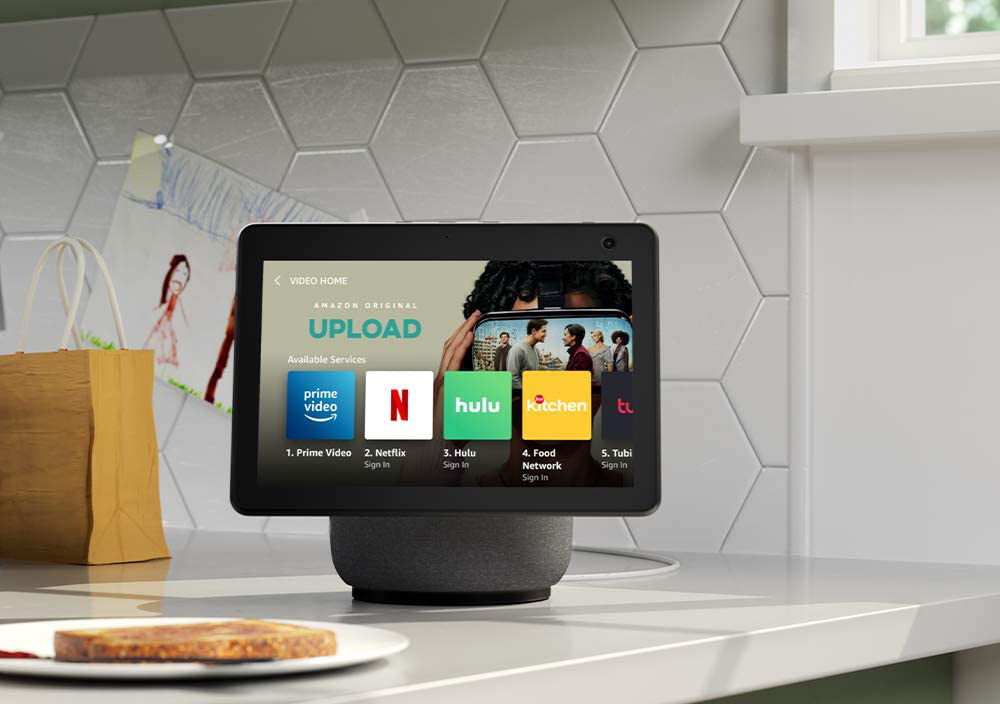 Want Amazon’s hottest new Alexa-powered device at its lowest price ever? Want to be one of the first people to get the crazy new Echo Show 10 with a crazy feature that has never been seen before on any Amazon device, ever? Well, you’re running out of time!
Amazon continued to expand its wildly popular Echo lineup of smart devices last year. The pandemic might’ve made a mess of most things, but life didn’t totally grind to a halt. In fact, Amazon released its most ambitious Echo product ever last year.
The company’s virtual personal assistant Alexa is quite possibly the most widely-used voice assistant out there right now, and people love Echo speakers. That’s especially true when they go on sale — for example, the 4th-gen Echo Dot is $10 off right now if you use the coupon code DOT2PACK at checkout. In addition to smart speakers, another type of Alexa gadget has really been exploding in popularity lately. We’re of course talking about Echo Show smart displays, and Amazon’s hot new Echo Show 10 just got its biggest discount ever. On top of that, it comes with a free $15 Ring smart LED light bulb despite the deep discount!
We’ve seen several different Echo Show models released over the years, but two have been particularly popular among our readers. First is the $90 Echo Show 5, which is on sale for $79.99 this week. It’s nice and compact so it can fit anywhere, yet it packs all the main features you might want from a smart display. Then there’s the Echo Show 8, which has the same features but packs a much larger display. This model retails for $130, but it’s down to $109.99 right now.
Aside from those popular smart displays, Amazon also now has the groundbreaking new Echo Show 10 in its arsenal.
Besides all the main features that people love so much on other Echo Show models, the new Echo Show 10 has a large 10.1-inch display. But the best new feature isn’t just the fact that the screen is larger… it’s the fact that the screen has a motorized swivel feature that follows you around automatically! This way you can move around while you cook in the kitchen or have a video chat with your family, and the camera and display will remain pointed at you the entire time. How cool is that?!
Amazon’s crazy new Echo Show 10 has a hefty retail price of $250, but it just got its biggest price cut ever. Hurry up and you can snag one for $199.99 for a limited time, which is a solid $50 discount. Not only that, but you get a free Ring smart LED light bulb with your purchase. That’s another $15 value, which means you’re enjoying $65 in savings!
This deal is bound to end either today or over the weekend, so don’t miss out.
Here are the key details from the bullet points on Amazon’s Echo Show 10 page:
Alexa can show you even more – With a 10.1″ HD screen that’s designed to move with you, video calls, recipes, and shows are always in view. The speakers deliver premium, directional sound.
Stay in the frame – Video call friends and family or take a picture while the 13MP camera with auto-framing and motion keeps you front and center.
Smart home made simple – Set up compatible Zigbee devices or smart products without a separate hub. Ask Alexa to show you security cameras, control lights, and adjust thermostats.
Take a look around when you’re away – Securely access the built-in camera to remotely monitor your home anytime with the Alexa app or other Echo Show devices.
So much entertainment – Ask Alexa to play your favorite shows, music, and podcasts from Prime Video, Netflix, Amazon Music, Spotify, and more.
The ultimate kitchen companion – Cook along with recipes on Food Network Kitchen, get unit conversions, set timers, add to your grocery list, and multitask with ease.
Put your memories on display – Use Amazon Photos & Alexa for a picture-perfect pairing. You can turn your home screen into a digital frame, share your favorites with friends and family, and even take photos. Plus, Prime members get unlimited photo storage.
Designed to protect your privacy – Amazon is not in the business of selling your personal information to others. Built with multiple layers of privacy controls including a mic/camera off button and a built-in camera shutter. Disable motion at any time.

Anuchard is an Action RPG, Launches Q3 2021 for PC

This is what Shivangi Joshi had to say about entering Bollywood

Love a jammy egg? This coconutty stew is for you