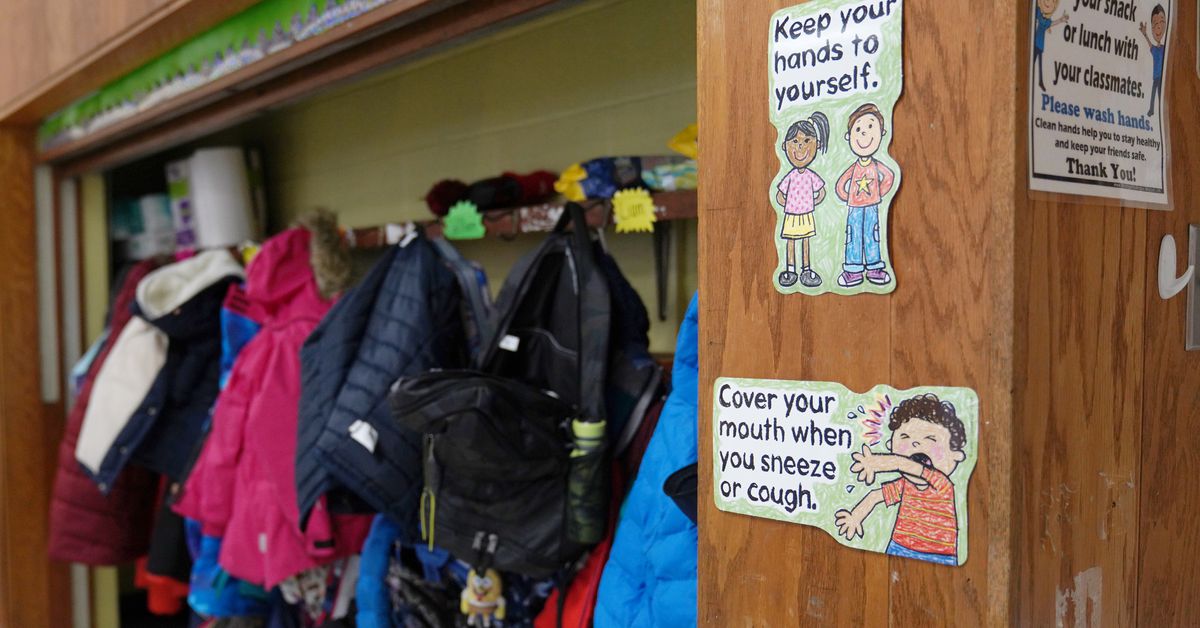 Signs hang to remind children of precautions to prevent the spread of the coronavirus disease (COVID-19) in the classroom at South Boston Catholic Academy in Boston, Massachusetts, U.S., January 28, 2021. REUTERS/Allison Dinner/File Photo

The pandemic upended daily life for much of 2020, and updated government data released Thursday pinned down by just how much.

The American Time Use Survey, a detailed accounting from the Labor Department of what people do each day, confirmed much of what is already known or suspected about the months under lockdown and quarantine, from the increased burdens of childcare, particularly for women, to the jump in home-based work.

Between May and December of 2020 for example, the share of people working from home nearly doubled, from 22% to 42% compared to those same months in 2019.

That change affected women more than men – among those working nearly half of the women surveyed did so from home last year versus just over a third of men – and it skewed heavily towards those with more education and white collar jobs.

Nearly two-thirds of people with a college degree worked from home compared with under 20% of those with no higher education. Among those in the finance industry nearly 70% worked at home, more than double the year before. By contrast, the share of people working from home in the leisure and hospitality industry increased from 11% to 19%.

The schism between those who could do their jobs from a dining room table and those who faced a choice between showing up – and possibly getting sick – or losing income, was among the defining economic and social impacts of the pandemic, and continues to shape the recovery. While most industries are nearing their pre-pandemic levels of employment, for instance, the leisure and hospitality sector remains more than 10% below the number of jobs it had before the health crisis.

The time use survey goes a level deeper to show what people did day-to-day at a time when much of the country had to rearrange its schedule, millions were unemployed, schools were closed, and the major diversions – from restaurants to movie theaters – were shuttered.

For the adults in households with children under 13, that meant time spent caring for them rose from five hours, four minutes a day in 2019 to six hours, three minutes last year – even if that meant fielding work calls as well. Households with younger children saw a larger increase of around 90 minutes spent on child care.

Though the increase was across the board, the division of labor remained skewed towards women, who spent more than seven hours a day on “secondary” child care – overseeing a kid while doing other things – compared with just under five hours for men.

The rest of the pandemic day was something short of a revolution.

People got about 10 minutes more sleep a day and an extra half an hour of leisure time – 37 minutes extra for men, 27 minutes for women. Of that, about 19 minutes was devoted to the now more than three hours of average daily television viewing.

Another 10 minutes went to computer games.

A seven-minute daily loss of “time spent socializing and communicating in person” was offset by the same time given to “relaxing and thinking.”

For those over 15, there was an extra four minutes of reading and three minutes of “sports, exercise and recreation.”

Among those 15 to 19, there was even more additional leisure time – about an hour and a half daily, with much of it consumed by television and “computer use for leisure,” a finding likely to add to debate about the broader impact of school shutdowns on the physical and mental health of adolescents.

Other findings may raise similar questions. Everyone spent more time alone – an hour a day on average, but for those age 15 to 19 time alone rose 40%, from 4.3 to 6 hours daily.

It’s not all bad.

In one study, many older adults reported positive benefits from increased time alone such as greater opportunity “to experience peace and quiet,” said Nancy Morrow-Howell, the director of the Harvey A. Friedman Center for Aging at Washington University in St. Louis.

And among parents “a large majority have felt closer to their kids,” said Richard Weissbourd, a human development and psychology professor at Harvard University’s Graduate School of Education. “One of the questions is are fathers going to take the first train back to normal here … or are they going to maintain some of this time and some of this closeness?”