The Extreme Left Can’t Sell Their Ideas, So They Have to Pervert Yours 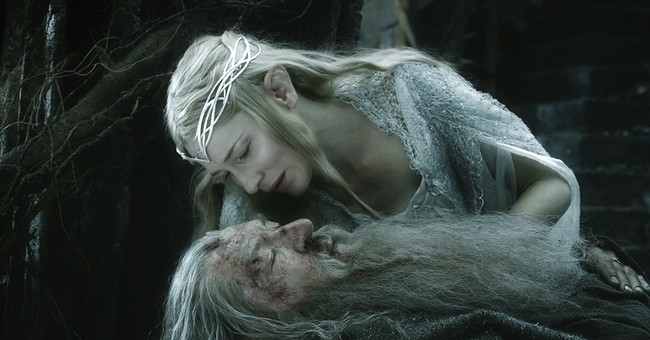 Yesterday, I wrote on the extreme left’s efforts to pervert the work of J.R.R. Tolkien, arguably one of the most influential and celebrated authors of the western world. The reason, I wrote, was that twisting and perverting the tales of Middle Earth isn’t just because they hate Tolkien (whom they think is racist), but because they know his work is influential and want to utilize that influence to sell people on their ideas.

Tolkien’s work is hardly the first successful property the extreme left has tried to appropriate, and it definitely won’t be the last. That’s because the left has to appropriate the work of others…these ideas can’t find success on their own. They have to piggyback the ideas into these worlds that you already enjoy spending time in so that you’re forced to confront and hopefully accept these ideas.

This is because activists are rarely good storytellers. When the point of your character or storyline is effectively propaganda, people smell the obvious ideological push and tune out. It tries too hard and insists on the idea they want you to accept, and as a result, the story and character suffer. People go find something more interesting to do.

The leftist activists know this, and so the idea comes to them that they can just inject their philosophies and ideologies into established properties, forcing it on you there. Since they have almost uncontested control of the cultural landscape in western society, they begin to push concepts, characters, and perversions into things they’ll know you’ll see.

It’s insidious, it’s lazy, and it’s evidence that these ideas aren’t good enough to stand on their own. They’re parasitic. Without these stronger hosts to carry them around, they die quickly.

Somewhat appropriately, like most parasites, whatever stronger host they infect quickly becomes sickly and dies off as well.

For instance, the social justice left that infiltrated and infected Marvel comics began releasing comics with leftist messaging and characters that represented their ideals all the way back in 2015. Female Thor was released, complete with over-the-top misogynistic bad guys that she beat up and put down with extreme girl power.

The character was rejected by readers for the most part and Marvel’s readership dropped off significantly. The character was forced, boring, and divisive. It was a betrayal to loyal readers as even the villains in the book were written as a mockery of them. Regardless, Marvel would continue this practice of altering or replacing beloved and established characters with woke versions. Now the comic book industry is in trouble.

This would go on to infect television superheroes as well. The show Batwoman on the CW made itself known as a lesbian feminist go-to before it even aired, and the utter collapse of the show happened very early. The second season saw the original actress replaced with another more diverse actress, but that didn’t save it either. Meanwhile, cultural mainstays like “Doctor Who” dove headfirst into leftist ideals, and the ratings crash left a crater you could see from space.

Creators attempted to tell us that people are just tired of reading comics or that superheroes are becoming a tired subject. Maybe to a point, but Japanese comics (knows as Manga) and their characters are exploding in success stateside while western comics and characters injected with wokeness can hardly get off the ground.

Japan doesn’t bother itself with modern western politics and focuses on good storytelling and character development. As a result, western audiences eat up their work with increasing voracity. For instance, the manga known as “Shingeki no Kyojin,” known in the west as “Attack on Titan,” found such massive success with both western and Japanese audiences that it’s now the largest comic book series ever released and its anime’s 4th season was ranked as the most popular television show…in the west.

Here’s the kicker. “Attack on Titan” has strong female protagonists, a character one can consider male or female based on the reader’s preference, and even a lesbian couple, but none of these characters are there to sell a message. They’re there as part of the story. They naturally fit into the universe. There’s no woke garbage there to convince anyone of anything politically. It’s just solid, brilliant storytelling on the part of creator and illustrator Hajime Isayama.

Why can’t the woke find this level of success? Because they’re blinded by their own bigotry, prejudices, and agenda. Their storytelling ability is limited to a strict code that doesn’t really allow for character growth, exploration of ideas, or even common sense. Their goal is force, not discovery. It’s compliance, not exploration. So their ideas are rejected out of the gate, and their only recourse is to attach them to something you love or have created yourself in order to sell it.

I wish I could tell you that due to the rejection and anger surrounding them appropriating popular stories and properties isn’t successful, but it is, at least in part. Little by little these ideas take effect. No one is there on mainstream stages to present different ideas or inject better storylines. They rule the pop-culture roost.

If we want to stop this perversion, we have to get involved.