UK politics live: Rishi Sunak challenged over cost of living as Labour says food prices ‘going up and up’ 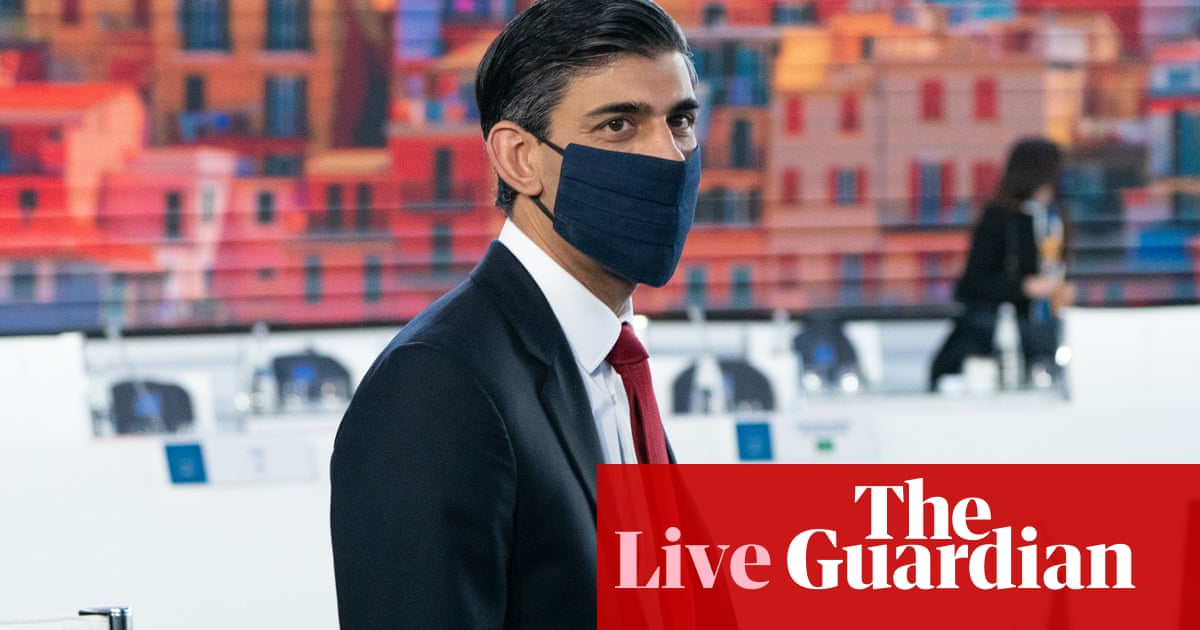 You can continue to follow coronavirus updates on our Covid live blog here:

And updates from the Cop26 climate conference here:

Boris Johnson denies he was snubbed by Macron

Was he snubbed by Emmanuel Macron, who left early and is already back in Paris, after their falling out, and was he offered more generous terms over French fishing boats in order to keep talks alive?

The UK hasn’t changed its position on the fishing issue, Johnson puts it:


We are working very, very closely with our French friends and partners on the things that matter most to the people of the world, and that is tackling climate change and reducing CO2.

By comparison with that hugely important issue, the ones you mentioned are really vanishingly unimportant, but since you ask about whether the UK has changed its position on the fishing issue, the answer is no.

Johnson denies the Chinese aren’t engaging, saying they didn’t come to Cop because of the pandemic. Same goes for Putin, he adds.

We need China to make more commitments as we see further pledges from other countries when they do, he says.

Asked about concerns about rising household costs to achieve a lower carbon economy, Johnson says he thinks people will understand this is a moment for growth and building towards being more green.

And there have been enough referendums, he adds.

Johnson says developed nations have a moral duty to make cash available to help developing countries move away from carbon.

The prime minister is taking questions from the media now.

He says there had been a sense of working together to bring down CO2 emissions at Paris but it was “floaty” and “there was no roadmap”, so countries had “no idea” how they were going to do it, which is the difference starting to be seen at Cop.

This is from Boris Johnson

The British prime minister is due to give a press conference shortly, from which I’ll be bringing you live updates.

The prime minister is due to give a press conference very soon. In the meantime, here’s a summary of the latest news:

I’m handing over to my colleague Lucy Campbell, who’ll bring you all the news from Boris Johnson’s press conference once it starts.


The UK should seize the opportunity of Ali Salajegheh’s attendance at Cop26 next week to once again press for the release of Nazanin, Anoosheh and all other arbitrarily-detained UK nationals in Iran.

Liz Truss has claimed that she and the government are ‘working tirelessly’ on behalf of Nazanin and others – here’s a chance to prove that.

Some of Nazanin’s supporters have been pointing out that if the government can’t resolve the issue of British nationals being picked up in Iran, then it’s unlikely to be able to fix the climate crisis. Let’s hope it can do both.

Richard Ratcliffe has called for Liz Truss and her colleagues to be “brave” over diplomacy on these cases – a firm representation to Ali Salajegheh next week would be a useful start.

The government needs to grant diplomatic protection status to Anoosheh as soon as possible and set out a clearly articulated strategy for bringing Nazanin and other arbitrarily detained British nationals back home from Iran.

Everyone at Amnesty has enormous respect for Richard’s unflagging spirit.

I’m going to spend a little time with him today to reassure him that we stand in full solidarity with him in his brave campaign for Nazanin’s release.

Zaghari-Ratcliffe was taking her daughter Gabriella to see her family when she was arrested and was sentenced to five years in prison shortly afterwards, spending four years in Evin Prison and one under house arrest. According to her family, she was told by Iranian authorities that she was being detained because of the UK’s failure to pay an outstanding £400m debt to Iran.

Boris Johnson has been heavily criticised for his role in the affair while serving as foreign secretary. In 2017, he wrongly told MPs Zaghari-Ratcliffe had been “teaching people journalism” before being detained by Tehran. Her family and her employer both maintained this was untrue but, within days, Johnson’s erroneous statement was cited as proof she was engaged in “propaganda against the regime” during a previously unscheduled court hearing.

The arrival of an Iranian delegation at Cop26 should be used by UK officials to press for the release of Nazanin Zaghari-Ratcliffe, Amnesty International has said.

Zaghari-Ratcliffe, a British-Iranian dual national, has been in custody in Iran since 2016 after being accused of plotting to overthrow the government.

Her husband, Richard Ratcliffe, is on day 10 of a hunger strike outside the Foreign Office in London, which he started after his wife lost her latest appeal.

Amnesty International said officials at the climate summit in Glasgow should be prepared to “seize the opportunity” presented by the arrival of a delegation from Iran to raise the issue of the country’s detention of UK nationals such as Zaghari-Ratcliffe and Anoosheh Ashoori.

The human rights group said the delegation will arrive next week and will be led by Dr Ali Salajegheh, the vice-president and head of Iran’s environment department.