Why can’t our kids get muddy playing winter sport? 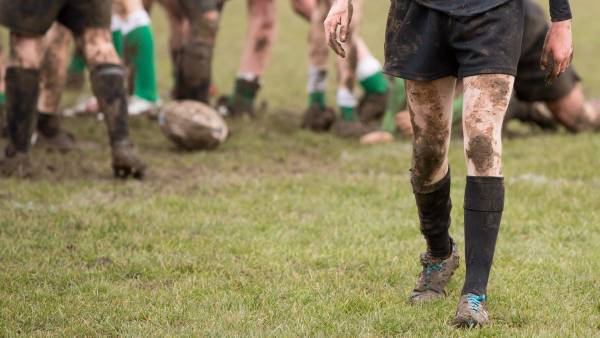 Remember when kids could play sport in the mud? Picture: Shutterstock

I am 100 per cent one of those parents who has thanked God when kids’ winter sport has been cancelled because it’s wet and dreary and we can hide back under the doona.

BUT, more recently, I am also one of the increasingly frustrated hordes of parents who has despaired as the ACT government has closed its sportsgrounds week after week because it’s too wet and cold, preventing kids from training or playing sport. Once is fun; week after week is not.

After plenty of stops and starts, the sportsgrounds did finally reopen on Friday for training and weekend play. Woohoo!

“The ACT government thanks sports peak bodies and users of the sportsgrounds for their patience whilst grounds were closed due to the wet weather,” a statement read.

And a lot of patience has been tested.

Some of my best rants: Can’t our kids get muddy? What is the problem playing a winter sport in winter conditions? Why are our kids being denied the pure pleasure of playing on a sodden ground, sliding over the tryline and getting proper muddy? Let’s just wrap our kids in cotton wool and enjoy being the most risk-averse society possible. It has been a very wet winter. Picture: Facebook

Yet, it’s true there has been a lot of rain this winter. And sport and society have moved on from memories of our free-range 1970s or 1980s childhoods playing in the slosh. For better or worse.

Local sports groups have been toeing the line but starting to become vocal about the need for better drainage on the sportsgrounds, considering the fees they pay to the government. There is also some questions around why the need for a blanket closure and why kids can’t play when they are likely to do less damage to a muddy field than an adult.

The official line from the ACT government was that “with low winter temperatures and periods of heavy rainfall the muddy, slippery and boggy surfaces pose safety risks to the community and increase the risk of damage to sportsgrounds if used”.

But it’s not as if we haven’t had a lot of rain before – in June 2016 Canberra airport recorded 144.2 mm and Tuggeranong copped 184mm. Shouldn’t our grounds be built to cope with that?

It’s not just public grounds that closed in the wet. Grounds such as those owned by Marist College also had to close at some points.

“Marist College Canberra has evaluative processes in place, which aim to prioritise participant and spectator safety and minimise damage to the fields. The College also considers decisions regarding ACT Government owned facilities, to support consistency and integrity across local sporting competition structures,” a spokesperson said. Sportsgrounds were officially declared open in Friday – at the tailend of the winter sports’ season. Picture: Facebook

The government was also concerned about the playing surface being damaged. “While light damage can self-repair, heavier damage may impact on the remainder of the winter season by making damaged fields unavailable,” the spokesperson said.

As to how the grounds are assessed before the decision to close them all was made, the government said inspections “were undertaken across a number of fields before decisions are made”.

“All sportsgrounds managed by the ACT government are curated by a dedicated team of turf professionals,” a government spokesperson said.

“The team use their collective skills and experience to maintain sports fields placing high emphasis on condition and safety.

“Our team work to ensure we have world class facilities within the ACT despite the unique challenges a climate of cool winters and hot, dry summers present compared to other jurisdictions.

“Inspections are undertaken across a number of fields before decisions are made. We also rely on rainfall totals, evaporation levels and future rainfall and temperature forecasts (i.e. single digit temperatures will not dry the ovals out). While conditions at specific ovals may vary slightly, where the observations on a sample of ovals dictates that closure is required, this decision is applied to all natural turf ovals.”

When asked if junior sport could be distinguished from senior sport because smaller, lighter players were likely to do less damage to the fields, the government spokesperson suggested there was no distinction.

“When sportsgrounds are closed due to wet weather it is done in the interests of public safety and to minimise damage which impacts future use,” the spokesperson said.

“While light damage can self-repair, heavier damage may impact on the remainder of the winter season by making damaged fields unavailable. This damage can occur from junior and senior sports. Wet grounds become slippery with users losing traction when running or suddenly turning, increasing the risk of leg, knee and ankle injuries.”

Canberra Region and Community Rugby League general manager Mark Vergano said he had heard some “very forthright” views both from parents who believed it was a winter sport that should be played in any conditions and others who support the cancellations to help prevent injuries.

He agrees playing in the mud can be fun at the time, but afterwards the ground dried hard and could become dangerous and unusable. Ground maintenance and drainage was an issue.

Mr Vergano said the government had a “very difficult balancing act” to perfect.

ACT Junior Rugby Union president Martin Sullivan said rugby “was a winter sport and the kids love to slide around in the mud”.

But he wanted the fees paid to the government to go towards better maintenance of the fields.

“We’re at the mercy of the government and the way they maintain their fields,” he said.

AFL NSW/ACT venue manager Steve Mahar said he was also a “frustrated dad and coach” in the face of the ground closures but also understood the government had to manage the fields in the face of so much rain.

He said the AFL had no problem playing in the winter in sub-zero conditions but that was when it was dry. When it was wet was another issue.

“You go to the ground and stand on the grass and it’s soaking,” he said, adding winter sports also had to consider how the grounds were going to shape up for summer sports.

Mr Mahar said more consideration should go into drainage but no one could expect “miracles mid-season” from the government. He also believed society and sport had changed and what was acceptable in the 1980s in terms of risk might not be now.

Netball ACT chief executive officer Matthew Battams said the sport was usually played on hard courts so the closure had less impact. Although some very young players did play on grass and their games had been affected.

Mr Battams did “100 per cent agree” there was a difference on the wear and tear on grass between an “adult AFL player wearing boots and an eight-year-old girl playing netball” and that should be taken into consideration.

A Capital Football spokesperson said there was frustration within the soccer community.

“Capital Football understands that the cancellation of community sports due to wet weather is frustrating, and we share in that frustration as we just want to see people playing football,” they said.

“We also recognise the importance of resting the fields when they are water affected to ensure they are not further damaged, and available to all community sports to play out their respective seasons once weather permits.”

It’s good to see, at a time when the Olympics are inspiring our kids to participate in sport, they will be back out on playing grounds across Canberra again this weekend.

Our journalists work hard to provide local, up-to-date news to the community. This is how you can continue to access our trusted content: